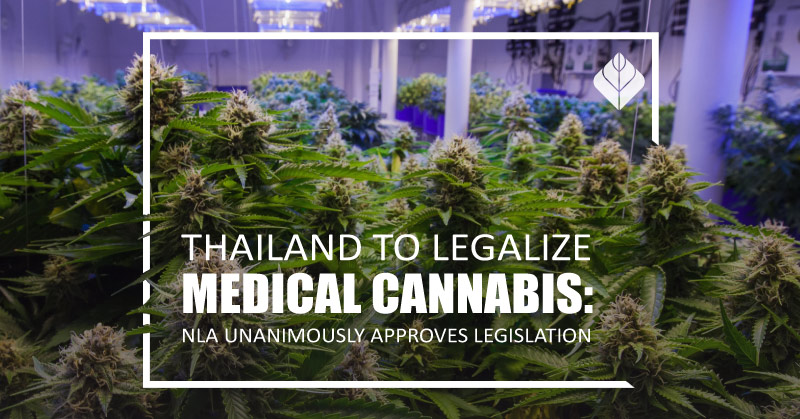 In a decision described as a “New Year’s gift”[1] to the Thai people, Thailand’s National Legislative Assembly unanimously passed new legislation that will permit the use of cannabis to treat medical ailments and conduct research. The landmark decision has made Thailand an outlier in a region known for having some of the toughest drug laws in the world surrounding cannabis.

Regulators, however, clarified that the legislation should by no means be interpreted as legalizing recreational cannabis, which, for now, remains prohibited. Violators apprehended for possessing, cultivating, and transporting cannabis for purposes other than those permitted by the new legislation will still be liable to imprisonment and/or fines.[2]

The legislation will take effect once it has been published in the Royal Gazette. While specific details have yet to be released, the Bangkok Post reported that the law will permit “the use of cannabis…For government and medical benefits, treatment of patients, research and development, agriculture, commerce, science, and industry.”[3] The newspaper added that users will be allowed to possess “specified amounts” to treat illnesses so long as they have a proper prescription from certified medical professionals or practitioners of traditional Thai medicine.[4]

Thailand’s Justice Minister Prajin Juntong stated that various stakeholders in the Kingdom’s cannabis space must start familiarizing themselves with key information about cannabis and the upcoming legislation. He added that government agencies such as the Office of Narcotics Control Board, the Public Health Ministry, and the Education Ministry will provide information to these stakeholders to ensure clarification at all fronts.[5]

Though the decision drew little controversy in the country, many have voiced concerns about patent requests from foreign firms that could enable them to dominate the local market, thereby putting Thai players and researchers at a disadvantage.

“Granting these patents is scary because it blocks innovation and stops other businesses and researchers from doing anything related with cannabis,” said activist Kitty Chopaka, who works with the cannabis legalization advocacy group Highlands Network.[6]

“It would be like allowing them to patent water and its uses,” she added.[7]

Commerce Minister Sontirat Sontijirawong, however, reassured the public that while the question of cannabis in Thailand is a complex issue, local researchers will nonetheless be able to utilize cannabis extracts to create medicines. He added that two of the eleven patent requests submitted to the Department of Intellectual Property have already been withdrawn.[8]

Thailand had historically used cannabis as a traditional medicine to ease pain and fatigue prior to being banned in the 1930s. In fact, cannabis strains found in Thailand were once reputed for their superior quality and potency, which made the Kingdom among the world’s top exporter of cannabis at the time. Today, stakeholders in the local cannabis space, including lawmakers, medical practitioners, and entrepreneurs, hope to capture the opportunities afforded by the cannabis industry not only to capitalize on economic opportunities, but also to benefit from the broad spectrum of reported medicinal qualities of the substance.

© 2019 Schedule One Ventures. All Rights Reserved.

All material presented is compiled from sources believed to be reliable and current, but accuracy cannot be guaranteed. This is not to be construed as an offer to buy or sell any financial instruments. It is not our intention to state, indicate or imply in any manner that current or past results are indicative of future profitability or expectations. As with all investments there are associated inherent risks. Please obtain and review all financial material carefully before investing.

Schedule One Ventures offers products and services intended solely for investors from certain countries or regions. Schedule One Ventures does not offer these products or services outside their intended countries or regions. Your country of legal residence will determine the products or services that will be available to you. Nothing on this website should be considered a solicitation or offering for sale of any investment product or service to any person in any jurisdiction where such solicitation or offer would be unlawful. Past performance is not a guide to the future. Market and exchange rate movements may cause the capital value of investments and the income from them to go down as well as up and the investor may not get back the amount originally invested.

The risks presented by private equity investing, included but are not limited to the following: substantial commitment requirements, credit risk, lack of liquidity, fees associated with investing, lack of control over investments and or governance, investment risks, leverage and tax considerations. Private equity investments can also be affected by environmental conditions / events, political and economic developments, taxes and other government regulations. In addition, investments where this is a concentration in a certain sector may be subject to greater risk and volatility than one which invest more broadly.

We accept no responsibility for the content of any external websites. The attention of users is drawn to Schedule One Ventures Privacy and Cookies Policy which includes details on the use of performance, identification and targeting cookies (both our own and third parties) to enhance the functionality of the web-site, to enable us to monitor usage and to assist with future communications. By continuing to use this site users will be deemed to have accepted this policy and the use of cookies for these limited purposes only.

Select the fields to be shown. Others will be hidden. Drag and drop to rearrange the order.
Click outside to hide the comparison bar
Compare
Compare ×
Let's Compare! Continue shopping